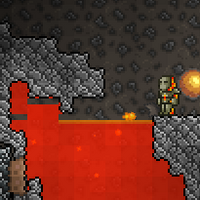 Some lava in a cave.

Lawa to płyn podobny do wody, lecz gdy do niego wskoczyć zadaje nam obrażenia. Najczęściej występuje w piekle. Lava is a glowing red/orange liquid found deep in the Cavern layer and in The Underworld, appearing instead of Woda at depths below 1,500 feet (750 tiles) in a small world, 2,300 feet (1,150 tiles) in a medium world, and 3,350 feet (1,675 tiles) in a large world. Contact with Lava deals 80 damage per hit on players and 50 damage per hit on enemies, and inflicts the On Fire! debuff on both. Lava also slows movement the way Woda does. Obsidian Skin Potion makes players immune to Lava damage, and the Lava Charm will allow players to be safely submerged in lava for 7 seconds.

Lava flows downwards and horizontally, settling and taking the shape of any block formations below and beside it, the way Woda does; however, Lava is more viscous than Woda, flowing more slowly. It also emits a medium amount of flickering light. Lava can be moved by the player via a bucket or pump.

Most dropped items of a Rarity lower than blue (which includes all Coins) will be destroyed when submerged in Lava past their vertical midpoint. Blocks cannot be placed directly within Lava, but falling blocks like Silt and Sand can fall into it, resulting in placement at its bottom, and these can be stacked until reaching the Lava's surface to form a safe bridge over it. Silt and Sand blocks placed this way will revert back to Lava if mined away.

Hellstone produces half a block's volume of Lava when mined in the Underworld.

An example of lava (together with Woda and honey) placed to be used as a crafting station. Notice the Crystal Ball above them.

Like water and honey, lava can be used as a minor crafting station. It works just like those two; in order to use it the player only has to stand nearby.

Lava can also be used to make the following items, though not as a crafting station: