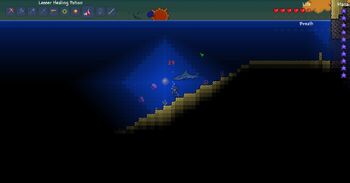 If you have the Vilethorn, you can easily farm the Ocean for Pink Jellyfish (which drop large amounts of coins) and Sharks (for Sharkfin, or to find the Diving Helmet). To do this, take a supply of about 50 Blocks with you (any type except Sand) and sink to the bottom. Quickly seal yourself into a cage of blocks with at least two tiles of head room height above you. Bail out the room you've created with a Bucket (or several). You have now created an air pocket where you can breathe, and you'll even have natural light during the day, as the sky will show through your air pocket. Alternately, once you have sealed yourself in on the sea floor with your choice of block, dig into the sand below, thus causing the water to drain into the newly made hole. Then (if you wish), once you have a decent air pocket, you can place blocks over the water that drained into the sand blocks you just made. That way, you don't have to constantly jump.

When you're ready to collect all the drops, you will probably need to extend your cage towards them. Place blocks outside your cage to thicken the left or right wall (whichever direction you need to travel) and then mine away the inner blocks. Repeat until you reach your destination.

Better yet, make a grinder. Put Wood Platforms in the top tile of water, then put a thin layer of lava over that (at least six tiles wide, but narrow enough you can grab all the drops automatically). Then build a cup of water to stand in, not connected to the ocean, directly over the center of the lava. Wield water candle and drink Battle Potions if desired, and leave the game running unpaused while you do something else.

Unique items attainable in the Ocean include the Shark Fin and Diving Helmet (dropped by Sharks), and Coral (grows on the Ocean floor). There are also chests, though they rarely contain items that aren't also available elsewhere.

14px Anomaly.When you are in an air pocket and you placed other blocks then sand on the ocean floor, other monsters, like zombies, or goblin scouts, may spawn there.

Bug: Chests will always spawn in the ocean but will often generate past the edge of the map making them inaccessible.

Bug: Sometimes, one part of the ocean may not be generated, causing a hole to be made that extends from the top to the bottom of the map in that spot.